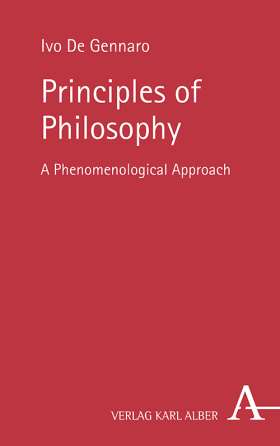 Ivo De Gennaro’s new book Principles of Philosophy offers a phenomenologically informed reading of some fundamental positions of the philosophical tradition. It can therefore be read as an introduction to phenomenological thinking in the perspective first opened by Heidegger’s Seinsfrage. Its objective is not that of giving an exhaustive account of the thinking of any single philosopher, much less of the trajectory of philosophy as a whole; rather, the aim is to retrace a few key moments in the course of philosophical enquiry, from its outset to its accomplishment in Nietzsche’s metaphysics, with a focus on the main motive of that enquiry: the always new attempt to establish a sufficient knowledge of the ultimate principle on which to build a human ethos.

Because the tradition of these attempts unfolds in the dimension of the original openness of being (i.e. alētheia), which broke forth, but was never interrogated as such, in the Greek inception of thinking, ample space is given to the pre-Socratic thinkers Heraclitus and Parmenides, as well as to Plato’s inauguration of metaphysics. Finally, because each one of these attempts consists in a path through language, particular attention is devoted to the way in which philosophy speaks and to the translation of pivotal philosophical terms from Greek to modern languages – notably English, German and Italian –, as well as between these languages themselves.