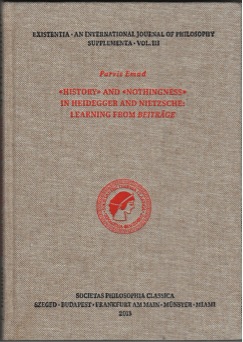 Parvis Emad‘s new book “History” and “Nothingness” in Heidegger and Nietzsche: Learning from Beiträge was recently published by Societas Philosophia Classica as a supplement to the Journal Existentia. As Emad writes in the Foreword, the book “ventures to enter into the battle of the two ‘giants’ Nietzsche and Heidegger in our time as this battle is fought on the question of being.” The Table of Contents reflects this approach: the book’s four Parts are entitled, respectively, “Gathering the Points of Convergence”, “Nietzsche Beyond Nietzsche”, “Nietzsche and the Thinking of and by Being”, and “Nietzsche and the Question of Being”. Consistently with the general theme of the volume, the study ends with a chapter devoted to Nietzsche’s and Heidegger’s stances on Christianity. With this book Parvis Emad offers another philosophical exercise from Beiträge, that is, from the hermeneutic stance that can be learned provided one is prepared to “plunge” into being-historical thinking.

Here you can read the Preface of Emad’s book.

The volume can be ordered through the homepage of the Journal Existentia.