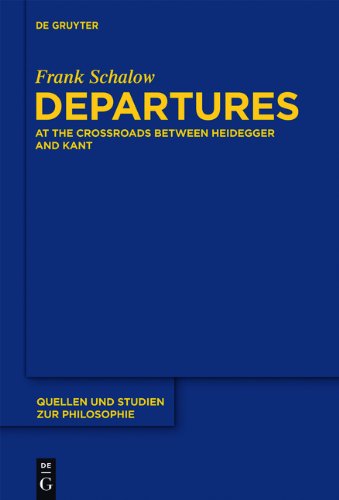 Last April Frank Schalow‘s new book “Departures. At the Crossroads Between Heidegger and Kant” was published by de Gruyter. This is Schalow’s third book on Heidegger and Kant, after “Imagination and Existence. Heidegger’s Retrieval of the Kantian Ethic” (1986) and “The Renewal of the Heidegger-Kant Dialogue: Action, Thought, and Responsibility” (1992). Apart from these monographs, Schalow has devoted a number of articles to different aspects of Heidegger’s Auseinandersetzung with Kant. While there is a vast literature on the relation between these thinkers, the distinguishing feature of “Departures” is that it elucidates their dialogue in light of the emerging corpus of Heidegger’s Gesamtausgabe, and, most significantly, of his posthumous treatises. This circumstance gives a particular weight to what Schalow declares – not only as a matter of fact, but programmatically – in the “Introduction” to his book, namely, that in his Auseinandersetzung with his predecessors Heidegger “gives voice to what otherwise remains muted – and thereby forgotten – in the most perennial of all philosophical concerns, the question of being.”

Download the Table of Contents here, the Flyer here, or buy the book here.